agriverinc.com
Wood windows are pleasing for their warm, natural look.  Along with the excellent thermal properties of wood, the aesthetic appeal of the wood window is its strongest asset.

Modern windows derive from the traditional wooden window.  Traditional wood windows have a wooden sash that holds the glass, which is sometimes divided into small panes by muntin bars.  The sash is placed within a wooden frame that is fixed to an opening in the wall.  At the bottom of the frame is a wood sill, sloped to shed water, and sides and top of the frame are called jambs.

There are several popular types of windows, classified by their method of operation.  Some include casement, double hung, sliding, hopper, awning and fixed.  Custom wood windows can be made to varying size*. 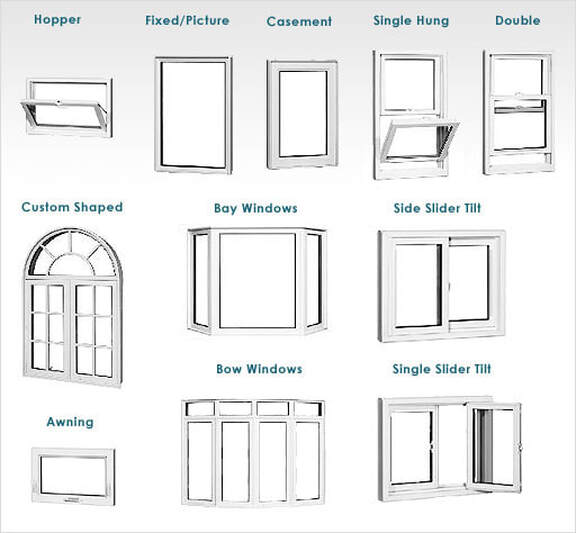 The components of a window and terminology have been handed down to modern windows.

​The definition of a window is as follows:
"an opening in the wall or roof of a building or vehicle that is fitted with glass or other transparent material in a frame to admit light or air and allow people to see out." 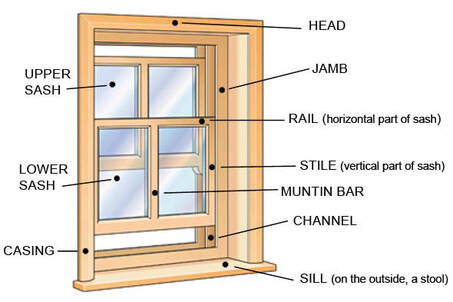 ​As you can see a window unit has several components.
​
A sash is the operable part of a window, it can open up or down (double hung shown here*), pushed out (casement) or even fixed (non operable sash).

This window unit shows three different window styles.  One is a casement window which typically opens out, some may open in.  This would depend on the placement needed for the window.
​
An awning window is used for smaller spaces like a vent for a bathroom.

A fixed window is closed shut.  Some times called a picture window when it has not muttin bars for smaller window panes.